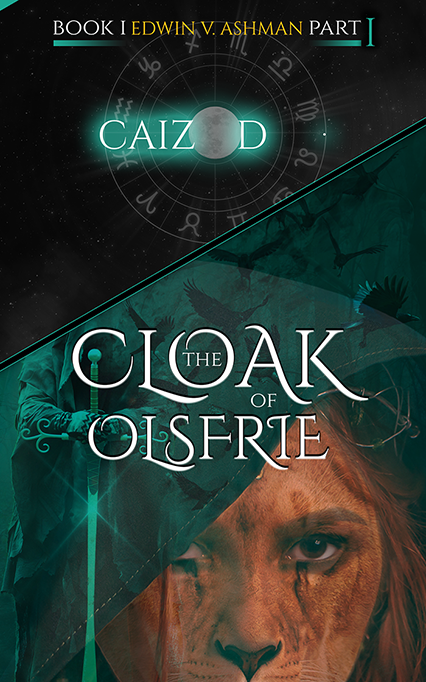 Caizod; The Cloak of Olsfrie: Part One - Edwin V. Ashman

A child at the time his family was murdered, Pawl is now an adult with a vague memory in which he recalls playing alone in the nearby woods as his home is ambushed by the notoriously brutal Eyks enforcing their law; unaware the boy they left alive. His secret may be impossible to keep, however, when...

Pawl's loyalty to his pseudo clan is apparently betrayed; forcing his father, Mixon, to quickly banish him out into a world his life is considered a commodity - a decision that inadvertently reveals the patriarch may not be the man he seems.

Meanwhile, Mixon's wife, Aeilla, is no less free of her own secrets as she defies her husband's wish to exile their son; finding herself dangerously close to the Eyks' village - and the truth.

Follow along as Aeilla soon discovers she is not alone in her search for the last Wafe - but who else (aside from the bloodthirsty Eyksmen) could be looking for Pawl ...and why? 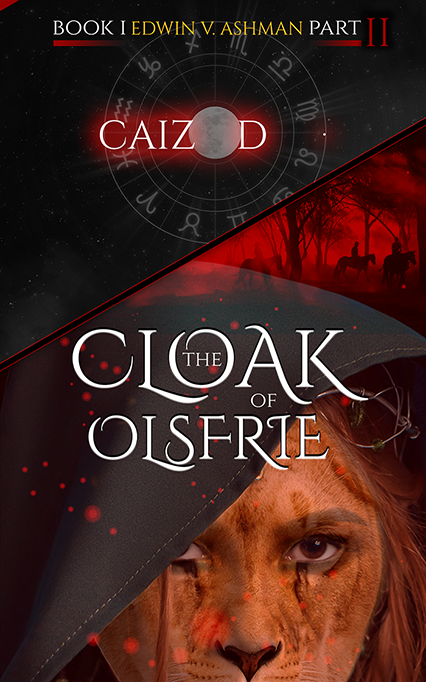 Aeilla suddenly finds herself facing the cold steel of her own sword as a mysterious figure has taken the blade to the wind-bitten skin of her cheek - taunting her....

He has made it clear he knows who she is - referring to Aeilla by name, but who is the scraping voice behind the murk, what does he want, and will he leave Aeilla alive long enough to find out? 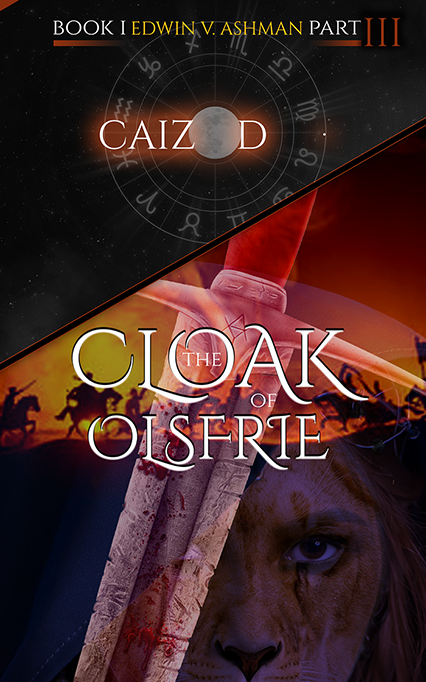 Led by the desperation to find her son, Aeilla agrees to follow a stranger's promise to take her to Pawl, but Aeilla's decision could soon prove to be a deadly one....

The stranger, whom she can only refer to as ‘The Man', has enlisted the help of an equally mysterious -and oddly eager to assist- guide to escort him and Aeilla dangerously close to the Eyksmen's village, wherein Aeilla has been informed Pawl is being held captive.

However, a snap decision at the hands of Aeilla herself alerts the murderous adversaries to the trio's vulnerable position within the secret tunnel running alongside the Eyk's highly-guarded territory...

...leaving someone to face the fatal blow of a claymore and exposing another to what may be a fight for their life. 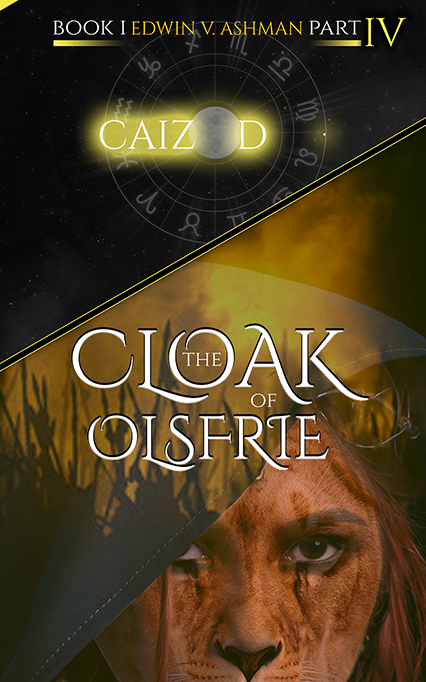 An unforeseen slaying has triggered a massive manhunt for the person responsible - however, the truth is only just beginning to unfold as the revelation of...

one man's cunning scheme inadvertently exposes another may possess a valuable secret about Aeillas painful past.

Meanwhile, these new events adversely cost Pawl his urgent rescue, ultimately begging the question: how long can he really afford to wait? 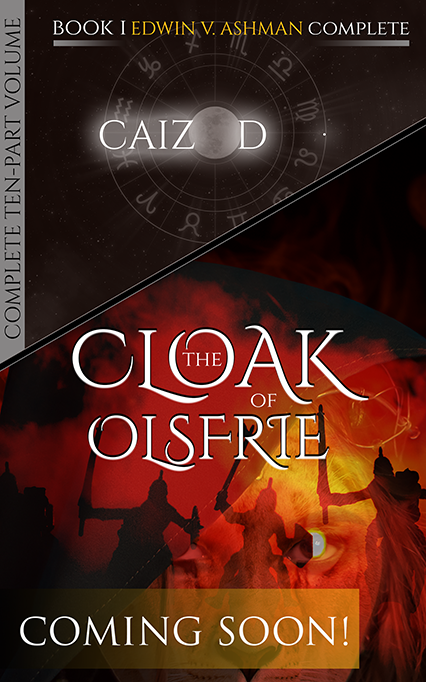 What if merely existing was a crime punishable by death?...

The Wafe people of Ourfe are criminals guilty of such a paltry offense; marking them a liability to anyone suspected of thwarting their capture - but why?

Pawl, the last man alive bearing the blood of the Wafe breed, has lived among the Olsfrie people for the last fifteen years - hiding in plain sight under the guise of the Olsfrie cloak from the brutal Eyks who deemed his race illegal when Pawl was still a young child; killing his entire village.

Many times, Pawl's return home post war had been met with a wave of open arms, celebratory feasts, and gifts in his honor. However, he knows this time is much different as an apparent act of treachery leaves his father, and the patriarch of the Olsfrie village, little choice but to quickly banish the boy Mixon found among the forest and raised as his own son - demanding Pawl relinquish the cloak from around his neck before he goes; once again making the last Wafe vulnerable to those that wish to rid the world of his kind... ...but might Mixon's hasty decision lead to the discovery of his own betrayal?

Meanwhile, Aeilla, Mixon's wife and a woman with her own secrets, is devastated by her son's banishment; provoking a vague memory in which she appears on a snowy night desperately attempting to render the ransom for the release of an unseen prisoner - whose identity --and fate-- unravel the cunning schemes and seemingly selfish motives of someone Aeilla was just beginning to trust.

What's more, Aeilla finds herself frantically tracing the familiar snow-covered path - only this time, in search of her son before the Eyksmen discover the Wafe they left alive.

Follow Aeilla as she travels through forsaken villages; lands once vibrant with clansmen from all four tribes happily coexisting, now strewn with evidence of the Eyk's vicious attacks on the people who once called them home in their quest to rid their world of one breed's blood. 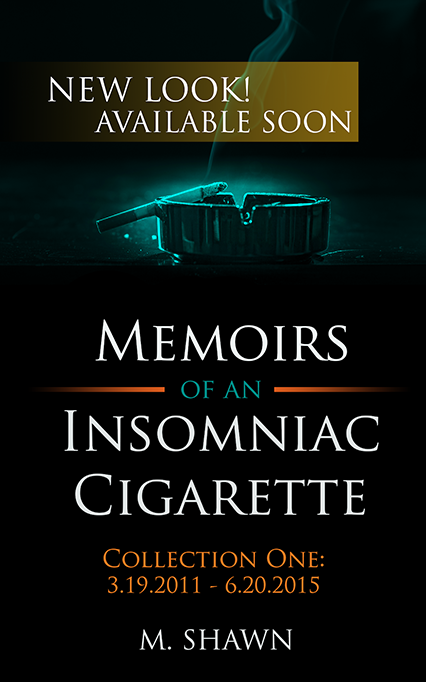 Two AM is when we tell the truth - if only to ourselves...

and Memoirs of an Insomniac Cigarette is just that; the raw honesty I chose (for reasons I still hold) not to speak out loud.

With titles like, Boners & Beer Bottles, Reverie, and Coming Clean, Collection One contains my most well-kept secrets about love, sex, and relationships: revealing everything I never wanted anyone to know... 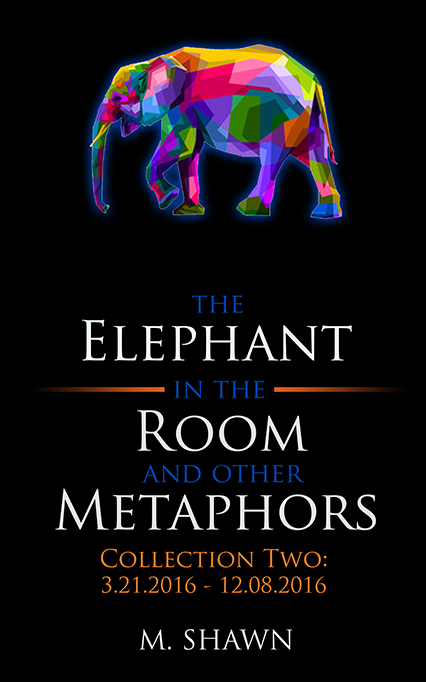 The Elephant In The Room And Other Metaphors - M. Shawn

It didn't matter how much she lied or used me, I still wanted to protect her...

Before long, my time wasn't mine anymore. I was living her life - cleaning up her messes and taking care of responsibilities that had nothing to do with me. I thought I was helping her...

...but all I’d really done was become her alibi.

When people inevitably started to ask questions, I made excuse after excuse for her behavior and would even argue that she had done nothing wrong...

They knew my excuses weren't adding up and that something wasn't right. I had to be honest with myself, really honest, before I started to see the truth...

Inspired by the BIG things we ignore for one reason or another, The Elephant in the Room and Other Metaphors tells the above story entitled Warmer Weather - and many more like it between the covers of Collection Two you will almost certainly feel an instant connection with...